Going Up The Stairs: Portrait of an Unlikely Iranian Artist

SIAWE / Past Events  / Going Up The Stairs: Portrait of an Unlikely Iranian Artist
by siawemanager
Past Events 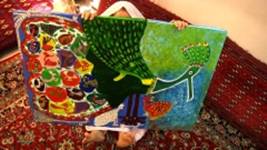 Interesting documentary of Akram, an Iranian artist (please see the description below).
The 2012 Houston Cinema Arts Festival takes place November 7-11, 2012 and will showcase films by, and about, the visual, performing, and literary arts.
The Festival presents a variety of films and documentaries from around the world.

Going Up The Stairs: Portrait of an Unlikely Iranian Artist

Akram, an illiterate 50-year-old Iranian woman, became a painter unexpectedly, and produced an explosion of powerful, personal and colorful paintings. When she finally tells her Western-educated children about her work, they arrange for her to have an exhibition in Paris. This screening is part of the Festival’s celebration of the 40th anniversary of Women Make Movies.